WHAT IS HYDROGEN WATER?

It’s water with an increased concentration of dissolved gaseous (molecular) hydrogen. Such water contains all the original minerals, has the original pH and composition. The presence of molecular hydrogen in water is accompanied by a negative oxidation-reduction potential, which can be measured with an ORP meter.

We recommend the use of ROYAL WATER for the production of water with molecular hydrogen. 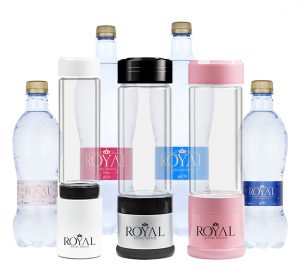 OUR HYDROGEN GENERATOR IS POWERFUL

Usually, only one cycle is enough, and you have water with a hydrogen content above 1000 ppb. In the case of several cycles in succession, we measured values up to 6000 ppb. Values were determined by titration with H2 Blue Kit®.

Practical portable hydrogen water generator. It’s used with the enclosed glass cup, whereby you can prepare 0.2 – 0.3 litres of hydrogen water in a short time. Or connect it onto a standard 1/2-litre bottle of water, turn it on, and have hydrogen water within reach.

ONLY USE WITH NON-CARBONATED WATER!!!!

There is only one limitation. You can only treat non-carbonated water; otherwise, the pressure in the bottle may increase too much. However, you should use water that is not contaminated with nitrates, heavy metals, hormones, other chemicals, and high sodium. We would be unnecessarily increasing the negative ORP and molecular hydrogen in the contaminated water, however, it would still remain “harmful”. Therefore, it’s important what water you hydrogenate. It will have a major impact on your body.

OXIDATIVE STRESS IS CONSIDERED TO BE ONE OF THE CAUSES OF AGEING. IF WE SUFFER FROM OXIDATIVE STRESS, TOXINS AND OTHER PATHOGENS ARE PREDOMINANTLY PRESENT IN YOUR BODY. IT’S BELIEVED THAT REACTIVE OXYGENS FORMS ARE RESPONSIBLE FOR THE OCCURRENCE OF OXIDATIVE STRESS. THESE SUBSTANCES ARE PRODUCT OF ORDINARY CELL METABOLISM IN ANY LIVE ORGANISM WHICH RECEIVES ENERGY FROM OXIDATION.

Of course, oxidation also occurs in our bodies. Oxidative stress is the result of a disruption of equilibrium at various levels in the cell and is caused by the predominance of pro-oxidation factors in the body over antioxidant factors.

Oxygen has the ability to be a friend and an enemy. All living creatures need it to breathe, so oxygen is an essential part of life on Earth. However, 2–5% of all the oxygen we breathe is converted to free radicals. Free radicals are molecules that lack electrons and will take them from anything around them, including DNA, cell membranes, fats, and proteins. Free radicals cause oxidation, also known as oxidative stress. Oxidation can be observed in everyday phenomena, e.g. if we cut an apple, it will turn brown on the sides – “oxidise”, when iron rusts, it essentially “oxidises”.

Hydrogen neutralises free radicals, converts them into the water, leaving no by-products. When hydrogen gets into the body (by drinking, bathing), it continually eliminates one of the most dangerous free radicals – the “hydroxyl radical” – creating harmless water that the body excretes by breathing, sweating and urine: 2 OH + H2 = 2 H2O. Continuous removal of the most harmful radicals from the human body can be critical to maintaining optimal human health and quality of life.

Molecular hydrogen produces a negative oxidation-reduction potential in the body. This increases the body‘s ability to fight free radicals and oxidative stress. Hydrogen molecules activate the gene responsible for the production of antioxidant enzymes (catalase, glutathione peroxidase), which destroy a large amount of all free radicals. This process is considered to be a strong protection against oxidative stress.

There are healing springs containing molecular hydrogen in various parts of the world: Lourdes (France), Tlacote (Mexico), Nordenau (Germany), and India. Water from these areas may have beneficial effects on chronic pain, rheumatism, skin diseases, circulatory disorders. Japanese scientists studied the water from these springs and found it to have a very specific molecular structure. It’s capable of releasing free electrons that bind free radicals in the human body, therefore acting as an antioxidant and protecting cells from harmful substances. 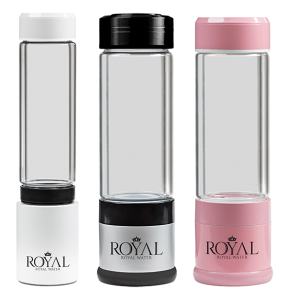 We recommend the use of ROYAL WATER for the production of water with molecular hydrogen.

A portable water generator with increased molecular hydrogen content. It’s more efficient than conventional hydrogen water generators thanks to its overpressure design solution. Such water contains all the original minerals, has the original pH and composition. The presence of molecular hydrogen in the water is accompanied by a negative oxidation-reduction potential, which can be measured with an ORP meter in mV. More information.

Follow Us
We use cookies to ensure you get the best experience on our website. If you continue to use this website, we will assume that you are satisfied with it. OkPersonal Data Protection